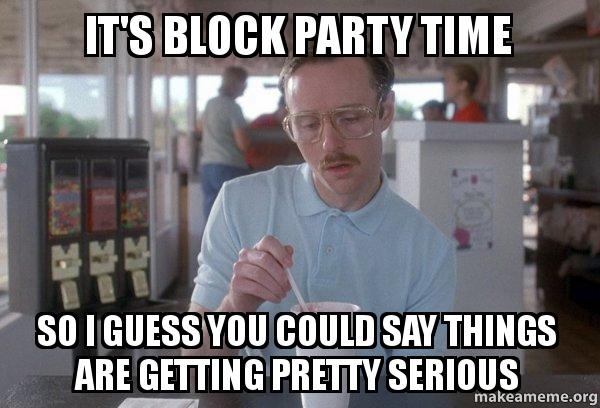 Conditions: Cooler and drier than Florida – that’s all that matters.
8 pax did a pre-workout manhood check and decided to un-fartsack anyway for a block party in the chilly Porkchop Hill gloom.
Several pax didn’t get the Slack memo and showed up couponless, so we raided YHC’s mobile coupon buffet for plates and dumbbells.  Somehow YHC ended up with the short stick – the 45 lb. Megablock.  Dibs on the reg’lar 35 lb. flavor next time.
Warmup:
Broad jump burpees across the herdball field, Al Gore for the 6, broad jump burpees back. (#crowdpleaser)
Cindy Tabata

Partner up for the last 5 minutes for:

Dewy Naked Moleskin:
A section of F3 Cherokee’s weekly email spoke directly to where I’m at in life, so I thought it was a fitting exhortation to share with the pax.

“People may spend their whole lives climbing the ladder of success only to find, once they reach the top, that the ladder is leaning against the wrong wall.” – Thomas Merton
What wall is your ladder leaning against? Where are you spending most of your time/energy?
I read a book a couple years ago by Andy Stanley. Originally he titled the book “Choosing to Cheat” which was of course a little controversial. Later he changed the title to “When Work and Family Collide”. In that book he talks about the principle that someone in your life is going to feel cheated. Either your work will feel cheated out of those next 30 minutes when you could get “one more” task done before heading home.
Or, your M and your 2.0’s are going to feel cheated because you chose to stay at work “just a little longer to get a couple more things done”.
So the question becomes, who do you want to feel cheated? Or who would be more okay with feeling cheated?
At work, there are several yous. Or several people who can do the things you can do. Think about it this way, if you were hit by a truck tomorrow and died, your work would have you replaced within a couple weeks.
On the other hand, your M and your 2.0’s would never be the same.
Where are you irreplaceable? Where are you indispensable? Where are uniquely positioned/qualified?
Spend more of your “first fruit” energies there.